Most of his childhood years were during and right after the end of WWII, when the majority of buildings had been bombed and were in ruins. They became Roberto’s habitual playground, stimulating his fervid imagination since those early years.
Right after completing elementary and middle school, his strong predilection for arts and drawing pushed him to attend Liceo Artistico (Arts High School) in Bologna. During those years his style was influenced by popular Italian comic strips such as L’Avventuroso and Il Vittorioso, Flash Gordon by Alex Raymond, “Saturno contro la Terra “ di Zavattini, Pedrocchi e Scolari, Mandrake and Faust by Rino Albertarelli, the Italian version of Mickey Mouse ( Topolino) by Floyd Gottfredson, and the heroic epic stories of the American Far West. He signed his work with the name Bob Patterson and later Bob La Volpe.

Roberto graduated from high school at age 19 and earned his national school teaching certification. He then enrolled in a scenography course at the Academy of Fine Arts of Bologna and then in 1961 in a decoration course. While studying, he started teaching in middle and high schools in Bologna and worked as a theatrical scenographer, staging plays by Aristofane, Menandro, Teocrito and Plauto.

He also cooperated with G.I.T. (Gruppo Incontri Teatrali) on March 1958, at the Theater of the Titan in the Republic of San Marino, working on the costumes for the Anthology of Spoon River. He later cooperated with CUT (Centro Studi Teatrali) of Bologna University under the direction of Gianfranco Ferri on July 1961. In Erlangen, Germany, he won several awards for his scenes in the Miracle of Theofile. On March1962, he worked at the Teatro Comunale of Bologna with The Miracle of Teofilo and Alcassino e Nicoletta. In March 1964, he worked on scenes and costumes at the Teatro Duse of Bologna for La Chiamata di Ogniuno. While working with the GTV ( Gruppo Teatrale Viaggiante- Traveling Theater Group) under the direction of Luciano Leonesi, he met Loriano Macchiavelli with whom he would work on an episode of Sarti Antonio in the 80’s. Finally he worked with the Cooperativa Fornaciai on October 1962 depicting the scenes of Antonello Capobrigante.

On March 1961, he completed the frescoes in the Buca delle Campane for his collegiate group “La Balla dell’oca” (The company of the Goose) and began signing his work “ Magnus Pictor Fecit”. RR also started working as a graphic designer for pharmaceutical company Gazzoni and for publisher Malipiero as a children book illustrator.

Finally in December 1963 Raviola decided to contact several publishers from Milan. At the Editoriale Corno he met Luciano Secchi, scriptwriter and screen writer who, at that time, used the art name of ESSELLE and later changed it into Max Bunker. That was the beginning of a very prolific partnership between Secchi and Raviola that would last almost 10 years. Together they produced the very successful series Kriminal and Satanic, among the best publications of the so called “ Italian dark series”. In order to meet the deadlines, Magnus, who started using this alias from the number 38 of Kriminal in 1966, designed only the black silhouette for the main character and introduced filmshot-like vignettes, which gave way to a new way of designing comics.

In 1965 he created some episodes of “ Dennis Cobb Agent SS018” inspired by Ian Fleming’s 007 and in 1966 Gesebel, inspired by Barbarella of Jean Claude Forest. Neither of these two works were met with great success. 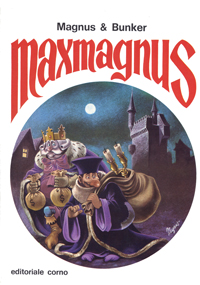 From 1968 to 1970 Magnus also created the satirical comic strip called Maxmagnus, published on Eureka, a magazine of the Editoriale Corno. The volume collection of 1970 won the “ Dattero d’Oro” at the Salone Dell’Umorismo ( Salon of Humor) in Bordighera.
Finally in 1969 after 2 long years of preparation, “ Alan Ford and the TNT group” was created and published. This series was characterized by a strong socio-political satire and it became famous very quickly, a fame which lives on today.
It’s also worth mentioning a few more independent stories published on Eureka: The little match boy-The blackbirds- Lurid Scorpio- The little tin soldier.
In 1975 after the completion of 75 adventures of Alan Ford with an average of 600 tables a month and 10 years of collaboration, Magnus dissolved his partnership with Max Bunker. He then started working with Renzo Barbieri, a publisher he was introduced to by Giovanni Romanini.

In August 1974 he worked on the drawings of “ Death at Midnight”, in November on “ Ten knights and a wizard”, and in March 1975 on “ That night at the women’s college”.
During this time he decided to challenge himself with drawing as well as writing the text. The first episode of “ Lo Sconosciuto” (the Unknown), the first of six volumes, was published in July, 1975, with the title “ A few hours to dawn”. The main character is an ex officer of the Foreign Legion with a cynical and ambiguous personality who works in times and places of red hot topicality.
Magnus’ graphic style is now becoming more refined and elegant. Each scene is edited and perfected; each character is studied in depth and detail.
The Unknown is considered by most comics critics Magnus’ best character and was published again in later years. 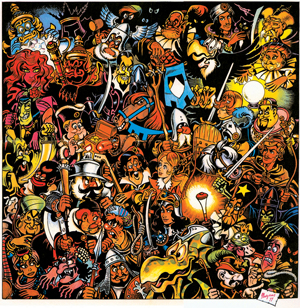 In 1977 in collaboration with Giovanni Romanini, Magnus creates The Company of the Gallows. The drawing style is close to Alan Ford’s. The story follows the adventures of a gang of misfits set in a medieval fairytale time around 1478, while at the same time describing events and facts from different areas of Europe and the Middle East. The entire collection had 20 volumes and ended in 1979.

The first draft of I Briganti (The Outlaws) in 1978 was inspired by his reading of a Chinese novel from the 14th century entitled “ Water Margin”. The plot revolves around a gang of robbers who challenged the imperial power in 12th century China. Magnus added to the story science fictional connotations, inspired by Flash Gordon, Robin Hood and Saturn against the Earth. The clear references to Mao Tze Tung turns the series into a political strip comic made for an intellectual audience. 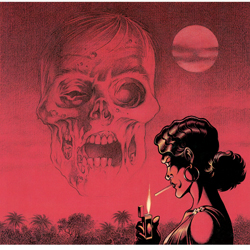 I Briganti would be continued later and eventually was terminated in 1989.
At this time Magnus, still working for Renzo Barbieri, created an independent horror story based on writings by Ennio Missaglia, called Vendetta Macumba (Macumba Vengeance) ,published in September 1979.
He used a format in three strips which was larger than the average pocket book. The artistic quality of this comic was quickly recognized. Magnus’ skill in utilizing the central strip for jungle landscapes and the wide angle scenes of the carnival of Rio will be used again in later works.

In January 1980 the new series in episodes of Milady nel 3000 goes on sale published by Il Mago of the Mondadori group and ends in December of the same year. This series was printed in color for the French magazine Metal Hurlant. The main character Paulonia Romana, Countess of Zumo, is an agent of the imperial secret service, who dedicates her life to the fight against extra terrestrial attacks on the dynasty.

Magnus’ collaboration with Renzo Barbieri continues with Il Teschio Vivente ( the Living Skull), published in May 1980. The Skull, which follows the same dark genre of the first 3 stories from 1974/75, is drawn in a very different style, a style which will be labeled “ clear line” and will be later utilized for Necron. The set up of the story in Medieval times is a reference to the style of Aubrey Beardsley.

The first issue of Necron, with texts by Ilaria Volpe, goes on sale in January 1981. The entire collection consists of 14 volumes and it would be the last one published by Barbieri.
This series is part of an erotic, pornographic genre which was not well accepted by the purist critics who sort of emarginated him for a time in his own country. However Magnus put some serious effort into his work.
He separated himself from the classic anonymous pornographic comics by fusing content that combines horror and vulgarity with an excellent graphic system and enriching it with grotesque and humorous inserts.

In January 1982 a short story called “Socrates Countdown” was published on Frigidaire, a cult magazine at the time, by Primo Carnera Publisher and Editorial Director Vincenzo Sparagna.

Oriental literature still continues to influence Magnus’ stories and in 1984 an unpublished story for the volume “Magnus” of Glittering Images called “Dreaming of rainfall” goes for sale; as well as the ” Plum Blossom in a Golden Pot” portfolio, whose characters will later be the protagonists of “The 110 Pills” (1985/86).

Two short stories were also published in the adult books of the series Diva by Glittering Images of Florence: “ On the Balcony” in November 1985 and “ Exhibition” in January 1987. 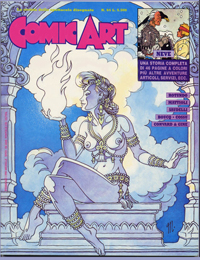 The first three episodes are published in the magazine La dolce Vita in October 1987. Later the series was moved to the magazine Comic Art till 1991.
Each of these short stories of only 6 pages is dedicated to female protagonists of different looks and personalities: from charming and seductive, to ghostly, to demonic, to motherly. Co-protagonists are the backgrounds and landscapes designed with maximum attention to detail.

In January 1987 Magnus illustrated 16 chapters of the novel “ Sarti Antonio e il malato immaginario” by Loriano Macchiavelli, which was published on the magazine “2000 Incontri” and curated by Renzo Renzi. This work was first collected in a volume by Cappelli publisher and then in 2006 by Dario Flaccovio.

Through ” The adventures of Giuseppe Pignata”, with graphics by Sergio Tisselli, Magnus challenges himself as a screenwriter. The story describes the odyssey experienced by an Italian man escaped from prison during the Roman Inquisition in 1693. The episodes were initially published on “Nova Express”, a popular magazine of Luigi Bernardi’s Granata Press . The entire collection of 3 volumes goes for sale in 1992.
In November 1994 Granata Press also publishes “ The Prince in his Garden”. This work consists of 30 illustrations of female nudes almost all in color with a phrase taken from oriental literature as a commentary.

In December 1994 “ Il Lunario1995 allegro ma non troppo” gets published as well.
The 5 stories are liberally taken from Fantastic tales of Liao and legends of the Apennines between Emilia and Tuscany with its revolving seasons. The real star of these tales is the Santerno Valley near the village of Castel del Rio, where the author moved to and settled down in August 1991.
Another short story from “The Fantastic tales of Liao’s” is La Signora Ning (Mrs. Ning), published on Comix by FCPanini on January 24, 1995 in which Magnus resumes a grotesque and horror style, which he had previously abandoned. In the same style he also started “ The new dream of rainfall” which remained unfinished.

His last posthumous work was The Valley of Terror ( Texone di Bonelli) which he had started in 1989 and to which he dedicated the last years of his life.
Magnus drew the most long lasting and famous characters of Italian comics, 224 tables in 7 years. The long processing times are justified by the spectacular care applied to every detail.
A true stylistic summary of his art.