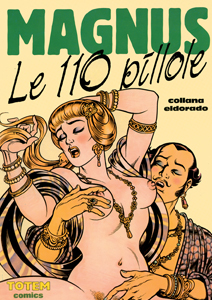 The 110 pills belong to Eastern tales series, like ” the Outlaws” and ” The Enchanted Ladies” for which Magnus has so much passion. Originally ” Ching P’ing Mei”- ” Plum blossom in a golden pot” is a Chinese erotic novel from the sixteenth century. It is the story of a rich libertine pharmacist, Hsi Men Ch’ing and of his six Wives. It tells stories that happened under the Sung Dynasty and it’s one of the most celebrated classics in the East. The translation by Einaudi in 1956 was censored, but the integrated Feltrinelli edition of 1982 is the one that made Magnus decide to draw it.

The story is about an Indian monk who gave Hsi Men 110 aphrodisiac pills to be used not more than one a month. The protagonist did not listen to this recommendation, instead indulging in a life of pleasure which consumed him in a few months. 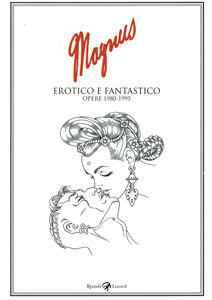